A vision for Prayer Rooms as part of Hope 2008 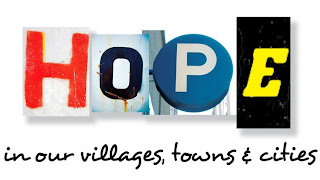 A vision for Prayer Rooms as part of Hope 2008

Church congregations have been working together to run 24-7 Prayer Rooms in Colchester area since 2000. These Prayer Rooms continue to be a place of inspiration, refreshment and encounter.

The vision is that this prayer room wil run continuously night and day, and that different congregations can take 12 one hour slots, keeping the prayer room running. The prayer room will be open during the day, so that any interested people can come in and find out about prayer to Jesus.

By running this Prayer Room together we can encourage; prayer for Hope 2008, church congregations working together, inspiration for fresh actions during Hope 2008, and a place of mission.

24-7 Prayer Rooms could also be part of Hope 2008 action in your local community. Colchester Boiler Room Community would like to serve you by helping you to run a 24-7 prayer room in your area.

How can you be involved?
Come to the Hope 2008 meeting at St Botolph's Church, Colchester at 7.45pm Monday 10 March.

Help us find an accessible venue for the 24-10 Prayer Room.

Ask your congregation to commit to taking responsibility for a 12 hour slot in the prayer room, and come and pray in the Rrayer Room yourself.

Plan a 24-7 Prayer Room as part of your action for Hope 2008. All you need is a venue available for a whole week, and willingness to pray and act. 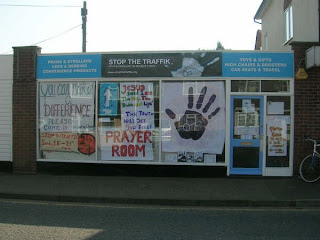 Posted by Colchester Boiler Room Community at 11:29 am No comments:

Thanks to Gillian for this report of comments on the Highwoods prayer room in January;

‘I felt the prayer room had a peaceful atmosphere and I felt very much at home there.’

‘I felt a new commitment to the people on Highwoods generally.’

‘It was good to know that there was an hour where you weren't going to be distracted. It was peaceful but very stimulating.’

‘I really enjoyed the opportunity to be involved and to pray for different needs. ‘

‘ It was as if He was showing me that time spent with Him is always good, which I should of course know but which sometimes gets a bit lost. Anyway, trying to clarify this I would just say that it felt as if offering prayer in that room for 48 hours was pleasing to Him.’

Also several people have told me about how they found peace in the prayer room and could sense God’s presence there.

This is from an e-mail from Jamie sent yesterday about the Youth café on Friday.

‘The most amazing thing for me is that last night we put Luke's friend, Lee on the hot seat at the end. A tradition to put adult helpers, particularly new ones, on the spot to keep them on their toes. We request questions from the young people - the person on the hot spot can choose not to answer. First question he gets is: "So when did you become a Christian?".. to which he responded " Last Sunday!". When we quizzed him about it afterwards, he said he became a Christian during the prayer room session that he and Luke were doing overnight on Sat night / Sunday morning. SO HALELUJAH TO THAT!’
Posted by Colchester Boiler Room Community at 5:36 pm No comments:

Julian of Norwich wrote of three "wounds" she came to desire in 1373.

"...by the grace of God and the teaching of the Holy Church I conceived a mighty desire to receive three wounds in my life: that is to say the wound of very contrition, the wound of kind compassion, and the wound of steadfast longing toward God."

What "wounds" would you desire to carry for Jesus?
Posted by Colchester Boiler Room Community at 11:18 am No comments: 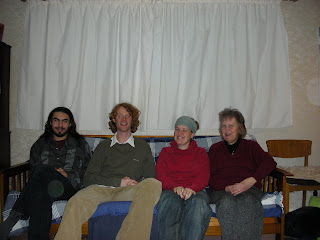 Date
Depart Friday 7 March – Return Monday 17 March.
Prayer Room runs Sunday 9 March – Sunday 16 March 2008.
Place
Turkey has a strong Muslim culture. Although freedom of religious practice is in the constitution, the practice of Islam is strongly culturally enforced. Turkish believers suffer persecution from their families and community. The secret police persecutes church activity.
The language is Turkish. Some English is sometimes spoken by educated young people.
The Mission
We have been invited by a church congregation to help them set up and run a 24-7 prayer room. They will also try and invite involvement from other church congregation.
The prayer room will be aimed at Turkish speakers.
The theme for the prayer room has yet to be agreed. However, there are recurrent prophecies about the fire of the Holy Spirit sweeping through Turkey. It should also be a place of meeting with Jesus. We will also pray for strength and grace to endure the persecution.
Prayer Points
For God to guide the planning and running of the prayer room by the Holy Spirit.
Presence of the Holy Spirit in the prayer room.
Financial provision for all team members.
Good preparation for the visiting team, and for the church in Turkey prior to the prayer room.
Good communication and working together.
Protection and perseverance for seekers and believers in the face of persecution.

Posted by Colchester Boiler Room Community at 11:10 am No comments: 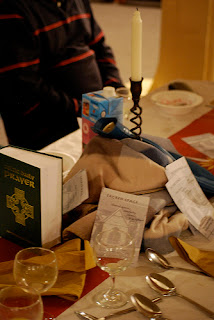 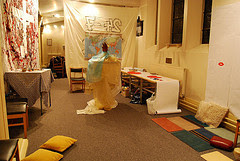 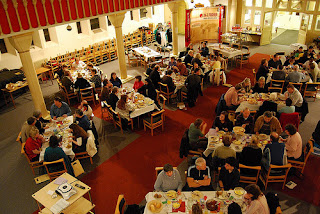 "I was chuffed to welcome 88 people to the Colchester Boiler RoomCommunity Feast, as part of the 24-7 UK Tour.

The had been alot of preparation. In fact it felt like we were organisinga wedding feast! But the God provided and worked through the preparation. About 20 people worked together to make the Feast happen. I'm sure thisis preparation for future service and community time together.

BIG thanks to Phil, Lucie and Charlotte for coming to encourage us...andshifting tables and helping decorating and serving!To me, 2 days later, it feels like the Feast was the beginning ofsomething, not the final event...

If you'd like to be part of the nextchapter of 24-7 Prayer with Colchester Boiler Room Community then please leave a comment below... " love Richard. 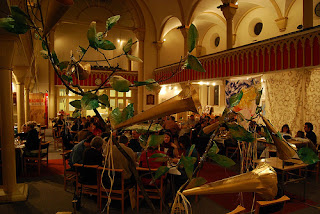 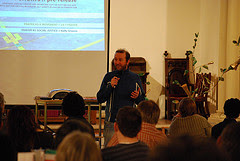 Here's Jason's experience of the evening....
"Welcomed with an orange, apple and tropical juice taste bud explosion; the guests and volunteers to the UK 24-7 Tour Colchester Boiler Room Feast wasted no time with introductions. People from various groups around Colchester and further afield mingled in the main hall and lobby after receiving a goodie bag, created by a boiler room member. What was in the bag will be revealed later...
Drumming was the primal medium to announce the feast with words swiftly followed by the Boiler Room duo of Richard and Katy Smith. Much to the delight of hungry faces food followed and table conversations lit up the Church at St Botolph's with a 24- 7 film shortly after the entree.
With some musical chairs, companions were shifted after both the main course and the dessert giving people the opportunity to chat to other organisations represented at the various tables.
The tables were represented by such organisations as: Street Pastors, New Neighbours and Highwoods Youth Cafe.
24- 7 provided the viewing for the next 45 minutes with short films and an awe inspiring talk from Phil T of 24 - 7 UK. Mustard seeds (in reference to the Parable) and bells (played by Chris) were used as contemplation devices with sounds seeming to come from the ethereal realms of heaven itself.
A lively prayer time and a noisy 'lively up your soul' time preceded the meditative bell. You see, inside the goodie bags were kazoos, whistles, and other noise makers. The idea was to wake up to the Holy Spirit to be in the presence of the Lord.
At about 10 o'clock the feast finished and clear up time went on, and on and on but it was all worthwhile.
Special thanks for the evening have to go to the cooks, especially Sue and the Decorating team headed by Michael. The whole evening wouldn't have taken place had it not been for the Richard and Katie combination whose constant eye for detail and people direction was fab.
Of course without the foundation of our faith, Jesus, none of the guests would be united under one roof. Thank you Jesus!"
Posted by Colchester Boiler Room Community at 2:32 pm No comments:

Lord Jesus,
Help me be true to you,
Kind to people,
and take the Gospel to the nations.
Amen

We pray 11am - 11pm on Wednesdays at 170 Berechurch Road and we also meet to pray for the local neighbourhood on the allotment.

We meet for Sunday lunch together at 1pm at 170 Berechurch Road. We have a Bible story that children and families can join in with

We also have Bible discussion and prayer times, in daytime groups and evening groups.

We take a regular part in neigbourhood activities.