Hope on the Streets prayer and fasting day

Some info from Aaron on prayer for the Hope on the Streets day;

We are holding a half day of prayer and fasting in preparation for hope 08.

The day will begin with some quiet meditation followed by a time ofworship, we will then spend a few hours praying for the differant areasincluded in hope. we will then spend some time in open prayer and willconclude with a time of sharing anything God has laid on our heartsfollowed by a final time of worship. There will be a break around 12:30 sopeople can grab a drink. (we will provide drinks)

please let me know if you can make it.

p.s. you do not have to stay for the whole day.

God bless. Yours in Christ,
Aaron Campbell
aaroncam85@yahoo.co.uk
Posted by Colchester Boiler Room Community at 8:17 am No comments: Links to this post

A visit to Romford

Last Wednesday a group of friends from Colchester Boiler Room Community made a pilgrimage down the A12 to visit friends in a Romford prayer community.

And what a welcome we received! Emma, Phil, Helen and Ian really opened their home to us. We received more pizza than we could eat (quite something considering the boys present!). James and I enjoyed a kickaround in the garden. We enjoyed the space to hang out together. 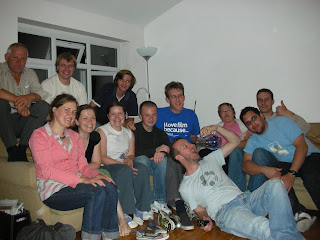 After food, we came together to introduce each other and each share a story. We were particularly encouraged to hear from friends who have just recently encountered God, and started their walk with Him.


We also shared about our experiences of community.

We heard that our friends in Romford, having been in the shared house for 9 months, now feel challenged to follow Jesus out of their comfort zones. Also, that it is the small things (like the cleaning!) that often present the challenges to living in community.

If you're interested in joining in with our Colchester Boiler Room Community Time Together please contact us on mail@colchesterboilerroom.org.uk

Posted by Colchester Boiler Room Community at 7:11 am No comments: Links to this post 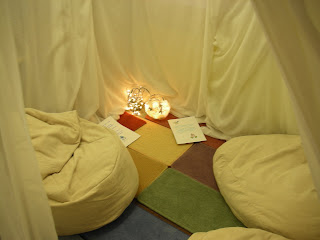 I had the privilege of serving as a prayer guide in Sanctum last week.

Sanctum is a prayer space that we set up in The Gilberd School, a secondary school in Colchester. 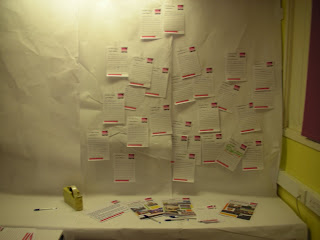 The prayer space was open during break times, lunch times and after school for pupils and teachers to use. 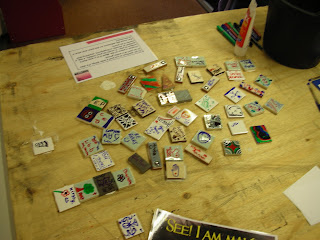 It was a prayer journey; including reflection, secluded space, contemplation of truths from the Bible, space for written prayers, space to listen and write what people thought God was saying...and people could even make their own prayer card to take away.

94 visits were made to the prayer room. Many pupils came back again after their first visit.

One pupil made a comment that they wished Sanctum was open all the time.

The prayer room was so popular that when we came to shut Sanctum at the end of lunchtime, several pupils still tried to come in.

I ws reminded of the openess and seeking that I encounter when I meet people at night as a Street Pastor. I was also reminded of Jesus' observation in Matthew 9 of the crowds being like "sheep without a shepherd".

For more stories and pictures check Tim's blog at http://timabbott.typepad.com/

The next Sanctum is planned for September...

love Richard
Posted by Colchester Boiler Room Community at 2:31 pm No comments: Links to this post

Lord Jesus,
Help me be true to you,
Kind to people,
and take the Gospel to the nations.
Amen

We pray 11am - 11pm on Wednesdays at 170 Berechurch Road and we also meet to pray for the local neighbourhood on the allotment.

We meet for Sunday lunch together at 1pm at 170 Berechurch Road. We have a Bible story that children and families can join in with

We also have Bible discussion and prayer times, in daytime groups and evening groups.

We take a regular part in neigbourhood activities.